How to make a sweet and fruity easy peach crisp with fresh peaches, canned or frozen—to enjoy year-round! Gluten-free, sugar-free, and optional add-ins for the peach crumble listed below!

If you love peaches as much as I do, relegating this delicious, melt-in-the-mouth easy peach crisp recipe (peach crumble) to summer just won’t do. Which is why I’m sharing methods to make this versatile peach crisp with fresh peaches, frozen, or canned - to enjoy at a moment’s notice year-round!

This easy peach crisp recipe relies on just a few inexpensive pantry-friendly ingredients and combines a lightly spiced cinnamon-peach filling with a buttery, biscuity cinnamon oat streusel topping. However, it’s also super customizable to dietary needs (including making a healthy peach crisp with no added sugar!) and what you have in your kitchen. Keep reading for my favorite add-ins and recipe variations.

I love knocking out this fresh peach crisp as a last-minute dessert for mid-week meals or as a dish to impress at BBQs, potlucks, parties, and more. While it may taste like you’ve been in the kitchen for hours, this naturally vegan peach crisp recipe only requires 5 fuss-free steps and 10-15 minutes of hands-on prep work.

The Difference Between Peach Crisp vs. Crumble vs. Cobbler

You may have noticed that all three dishes seem very familiar, so what is the difference? First, you’d usually make a peach cobbler with a biscuit dough or cake mix batter topping. When using dough, it’s often dropped in rounds to create the look of a cobbled path, hence a ‘cobbler.’

The difference between a peach crisp and a peach crumble is a little harder to place. Once upon a time, a crisp usually meant oats are in the streusel topping, though the terms are primarily used interchangeably now (as I do in this post). They both refer to a dessert with a fruity filling and streusel topping made with flour, sugar, butter, and sometimes oats.

If your peaches aren’t fully ripe, pop them in a paper bag with an apple or banana to encourage them to ripen sooner.

A streusel topping is one of my favorite dessert elements. It’s 'buttery', crisp, and fresh yet warming thanks to the addition of cinnamon and is perfect for this peach crumble.

You may also like to sprinkle over (or mix in) a small amount of sugar, which will caramelize in the oven and make for a sweet, 'buttery' topping.

What could I add to The Peach Crumble?

Like any crumble or crisp, there are plenty of ways to adapt and adjust this recipe. Here are a few of my favorite options to help you find your perfect peach crisp:

Be careful not to add too much liquid, or the filling will become overly watery. In that case, add some cornstarch to thicken the filling (refer to FAQs).

How to Make Peach Crisp?

With minimal effort, you can get this delicious peach crisp on your table in under an hour from scratch!

There’s no need to peel peaches, as the cooking time will soften them and make them barely noticeable within the peach dessert.

However, if you’d prefer to peel them, slice a small X at the base of each peach, blanch them in boiling water for 2 minutes, then transfer them to an ice bath until they’re cool enough to touch. At this point, the skin should peel away easily.

If it browns too quickly, tent some foil over it as it bakes.

Can I make peach crisp with frozen peaches?

Allow the peaches to defrost and discard the excess liquid, patting the peaches dry. Then continue with the peach crisp recipe as written.

It should also be possible to cook them from frozen (adding an extra 5-10 minutes). However, you’d need some cornstarch or other thickener in the filling, so it’s not too watery.

Can I make peach crisp with canned peaches?

Just drain the liquid from the can (feel free to use it for another recipe) and continue with the recipe as written. Peach crisp with canned peaches will generally have a mushier filling, but it will still taste delicious.

Can I thicken the filling?

If you have very juicy peaches or want to ensure you’ll avoid a watery filling, I recommend adding a few teaspoons (3-4) of cornstarch to the peach mixture before baking it.

Can I omit the oats?

I love making peach crisp with oats for the added texture. But omit the oats if preferred.

You can also top the vegan peach crisp with more fresh fruits like raspberries and other berries for the contrast In texture and flavor.

Make ahead: Prepare the filling and topping for this easy peach crisp/crumble separately and store them covered in the fridge for up to a day before assembling and baking. You can also freeze the cinnamon streusel topping for up to 3 months.

Store: Allow the peach crumble/crisp to cool and store leftovers either covered with plastic wrap at room temperature for 2-3 days or in the fridge for 4-5 days.

Freeze: The baked crisp will freeze for up to 3 months, tightly wrapped to avoid freezer burn/ice crystals. Note the topping won’t stay crispy upon thawing and may benefit from broiling.

Reheat: You can reheat a large amount in an oven at 350F/180C until warm (around 15-20 minutes). Single portions will also reheat in the microwave for 1-2 minutes. Note that the topping won’t remain as crisp when microwaving, though.

If you try this easy peach crisp recipe, I’d love to know what you think in the comments below. I’d also really appreciate a recipe card rating! 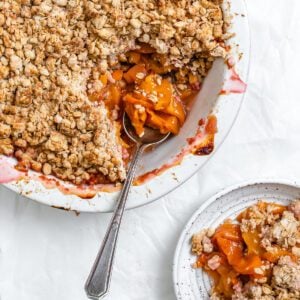