Melt-in-the-mouth baked vegan candied yams with marshmallows are simple to prepare, can be made with unrefined sugars, are wonderfully spiced, and are perfect for your Thanksgiving table!

With delicious vegan sourdough stuffing (with vegan sausage and apple), a low-carb cauliflower stuffing, and garlic and herb roasted vegetables already under my belt, I’m well on my way to compiling this year’s vegan Thanksgiving menu. But what Thanksgiving table would be complete without delicious vegan candied yams with marshmallows?!

This holiday classic has had a vegan make-over by replacing dairy with non-dairy ingredients, like vegan butter and vegan marshmallows. The result is baked candied yams with ALL the flavor of old-fashioned candied sweet potatoes, but 100% vegan and cruelty-free. Best of all, your family won’t even be able to tell the dish is vegan.

The combination of tender sliced sweet potatoes (no canned yams here!) tossed in a rich sauce of brown sugar, vegan butter, vanilla, and several spices, all topped with vegan ‘mallows is undeniably more-ish. I have yet to have leftovers!

Even better, I’ve also included several recipe variations below. These include using unrefined sugar, swapping out the ‘mallow topping for pecan streusel, adding even more flavor with add-ins like orange zest, and more. That way, you can easily tweak this recipe to your (and your guests’) dietary and flavor preferences with minimal effort.

You can also partially prep the homemade candied yams a day in advance AND freeze the leftovers for a fuss-free holiday! So, let’s jump right in.

What’s The Difference Between Yams and Sweet Potatoes?

The truth is, while yams and sweet potatoes are two different ingredients, candied yams are made using sweet potatoes, often referred to as ‘yams’ in the US.

When it comes to the differences between the two, yams are actually starchier, less nutritious, and not as readily available as sweet potatoes. Yams also have brown, rough skin on the outside and a yellowish/pale interior. Whereas sweet potatoes come in orange, white, and purple varieties (the orange ones being most commonly used to prepare Southern candied yams).

This candied sweet potato casserole (yam casserole with marshmallows) requires only a handful of simple ingredients, several pantry staples, and just 8 ingredients in total (plus salt)!

You could make candied yams with maple syrup or coconut sugar for a refined sugar-free version. Alternatively, use a combination of granulated sugar and maple syrup.

What Could I Add to Vegan Thanksgiving Yams?

The above vegan marshmallow yams recipe is already sweet, buttery, moreish, and absolutely delicious. However, there are several variations and add-ins you can choose from to tweak this recipe to your liking.

How to Make Vegan Candied Yams with Marshmallows?

Making candied yams is super simple. Just peel, chop, toss with the seasonings, and bake. At the end, top the candied yams with marshmallows (vegan, of course) and warm up for a few minutes further. Voila, delicious Thanksgiving yams the entire family will love!

Using a mandoline to slice the sweet potatoes can help cut down on prep time.

You could alternatively slice the sweet potato into ¼-inch thick rounds (for less chopping) or small ½-inch cubes, but the baking time may increase slightly.

You don’t want the marshmallows to start bubbling, or they’ll turn into a white goo. For browner ‘mallows, broil them instead of baking.

Enjoy the sweet potatoes with brown sugar and marshmallows as a star on your Holiday table alongside all your other favorite holiday dishes, or serve it as part of a Sunday dinner! Then, finish the meal with apple pie baked apples for a proper fall celebration.

Can I use mashed sweet potatoes/yams?

To make for a more traditional vegan sweet potato casserole. First, cook the sweet potatoes by steaming, boiling, or roasting them. I prefer the latter as it caramelizes the sugars within and brings out the potatoes’ natural sweetness (you may even be able to reduce the amount of added sugar).

What if the candied sweet potato casserole is too watery?

This shouldn’t happen unless you double the sauce or add more liquids. However, if the sauce looks pretty watery halfway through the baking, add some cornstarch slurry (1tbsp starch to 1tbsp water) into the dish and mix well.

How to make candy yams on the stove?

If your oven is packed to the brim with holiday dishes, don’t worry, you can prepare these stovetop candied sweet potatoes instead.

Start by peeling and slicing the sweet potatoes. Then, in a large skillet or Dutch oven, add the sauce ingredients (minus the vanilla) and mix until the sugar melts. Then add the potatoes, the vanilla, and ⅓ cup of water and stir well.

Cover the pot with a lid and cook over low for 45-60 minutes, stirring occasionally to ensure the yams are fully coated with the syrupy sauce until the yams are fork-tender. If the sauce thickens up too much, add more liquid. If it stays loose, add some cornstarch slurry.

If you want to make healthy candied yams that are sugar-free, I recommend using a brown sugar alternative or a maple syrup alternative for the best flavor.

Store: Allow the candied sweet potatoes with marshmallows to cool and store leftovers, covered, in the fridge for 4-5 days.

Freeze: Allow it to cool and store in a freezer-safe airtight container for up to 3 months. Thaw it in the fridge overnight before reheating.

Reheat: The leftovers will reheat well either in a microwave (1-2 mins based on portion size and microwave power) or in the oven (at 350F/175C) until warm.

Can You Make Candied Sweet Potatoes Ahead?

Make ahead: You could make these vegan candied yams the day before by baking them up until the point of adding marshmallows, then allow them to cool and store, covered, in the fridge. Remove the dish from the fridge 30 minutes before reheating, adding the marshmallows in the last 5 minutes (stir beforehand to redistribute the sauce).

If you want to prepare the elements without baking them, you can also do that the night before. Store the sliced potatoes in a container of water with plastic wrap to keep them from browning, and prepare the sauce in a separate bowl (it will solidify but just needs reheating to assemble the vegan Sothern candied yams to bake).

If you try this easy vegan candied yams recipe (candied sweet potato casserole), I’d love to know what you think in the comments below. I’d also really appreciate a recipe card rating! 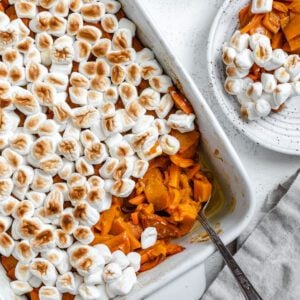