With a combination of coconut extract, coconut cream, and shredded coconut, you certainly won’t be searching for the coconut flavor in this vegan coconut cake. My aim was to find the perfect recipe that combines simplicity and flavor, and after a few attempts, I think I’ve cracked it!

This dairy-free coconut cake is super soft and fluffy and requires one bowl, simple pantry ingredients, and there are plenty of ways to adapt the recipe. In fact, you can use this one recipe to make a coconut sheet cake, layer cake, loaf, or cupcakes, and experiment with recipe variations for added flavors and toppings to suit your mood.

Not only is this coconut cream cake practically foolproof, but it’s made even simpler with a stand mixer. Just throw all the ingredients in the mixer bowl and let the mixer do all the work - voila!

After baking, allow it to cool, then spread over the fluffy vegan whipped cream topping for a treat that’s moist, tender, creamy, packed with coconut flavor, and sweet—but not overly so. Plus, it tastes even better on day two, too, so make enough for leftovers!

This vegan coconut cake recipe relies on simple, inexpensive pantry staples, most of which you likely already have to hand.

If you want to make a sweetened coconut topping, add in a few drops of coconut extract and some powdered sugar (regular, unrefined, or a sugar alternative like erythritol), added to taste.

What Could I Add To The Coconut Sheet Cake?

There are plenty of ways you can adapt this vegan coconut cream cake recipe with different mix-ins and toppings. Here are just a few of my top favorites:

Soften the jam in the microwave, use a pastry brush to brush it over the cake, then sprinkle it with shredded coconut.

How to Make Vegan Coconut Cake?

Be careful not to over-mix the batter, though, so a few tiny lumps are OK as long as the ingredients are combined.

Instead of spreading it, you could use a piping bag and piping tip for a more decorative cake topping.

Can I make this into a coconut layered cake or loaf cake?

To make a coconut layer cake, divide the cake batter between two 8 or 9-inch cake pans. The baking time will vary, so check on them at 22 minutes and every few minutes after until a toothpick inserted into the center comes out clean.

I haven’t tried this recipe in a loaf tin, though I imagine it should work, though there’s enough batter for two loaf pans unless you half the recipe. The baking time will be slightly higher, as these will be thicker.

Can I make these into coconut cupcakes?

I haven’t tried it though it should work. It’ll likely make around 24 cupcakes and need to be baked for between 20-25 minutes. Check with a toothpick to check when they’re cooked.

Can I make it gluten-free?

I recommend using an all-purpose gluten-free flour blend like Bob’s Red Mill or King Arthur’s for the best results. The cake will probably be slightly denser and drier.

Make ahead: This dairy-free coconut cake tastes even better on day two, so I’m a big fan of assembling the entire thing in advance. You could also bake the cake a day in advance and leave it to cool overnight before adding the topping.

Store: Because of the coconut cream topping, it’s best to store this cake in the refrigerator, covered, for 4-5 days. If un-topped, you can store it in an airtight container at room temperature for up to 3 days.

Freeze: It's best to freeze it without the topping. Wrap the coconut cake carefully in plastic wrap and freeze for up to 3 months. Allow it to thaw in the fridge or room temperature, then cover, slice, and serve.

If you try this easy vegan coconut cake recipe, I’d love to know what you think in the comments below. I’d also really appreciate a recipe card rating! 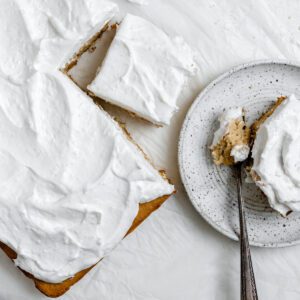