These vegan rice krispie treats are gooey, marshmallowy, sweet (but not overly so), and made in just minutes with just 4 ingredients! Flavor variations included!

Unfortunately, no. While most ingredients within this puffed rice cereal are vegan, they’re fortified with animal-sourced vitamin D3, which derives from lanolin (the oil on sheep’s wool). More so, commercial rice krispie treats usually use gelatin-based marshmallows derived from animals. Many recipes also include dairy butter.

Luckily, with just a few simple ingredient swaps, you can transform this childhood classic into a delicious vegan rice krispie treats recipe, and no one will even be able to tell they’re vegan!

Best of all, they take just minutes to prepare and are a crowd-pleasing treat loved by children and adults alike. Plus, this recipe is easily adjustable, too. That includes adjusting the consistency (from super ooey gooey to crisp and firmer) and flavor (with the extracts and add-ins of your choice, like peppermint rice krispie treats).

When looking for vegan marshmallows, look for a vegan symbol on the packaging and/or check the ingredients to ensure there is no gelatin (or any other non-vegan ingredients, of course).

Homemade rice krispie treat bars are super simple to prepare and not much harder to customize. Here are a few ways to add to this vegan treat:

For vegan chocolate-dipped rice krispie treats, I love to dip them only halfway in either vegan dark or white chocolate, sometimes with added extract in the plant-based chocolate for more flavor.

Along with enjoying these dairy-free rice krispie treats as a simple treat, there are plenty of ways to decorate them to fit different themes and events, using:

How to Make Rice Krispie Treats?

Vegan marshmallows don’t melt like regular ones, so you may end up with some lumps. It should mostly melt down into a single mass, though.

It can help to use a layer of wax paper over the mixture when pressing it into the pan (using the bottom of a glass also helps). Alternatively, use a spatula lightly greased with oil.

Can I use mini marshmallows?

You can use mini, regular, or giant marshmallows and adjust the volume amount accordingly. If using larger mallows, it’s best to cut them into smaller pieces to assist with the melting process.

Mine are all eaten before I have this issue. However, I’ve heard that placing a slice of bread in a Ziplock/Stasher with the rice krispie treats (2-3 of them) and leaving them overnight should help to soften up the bars again.

Why are my rice krispie treats too wet?

Using too much vegan butter can cause rice krispie treats to be overly sticky and wet (too little can make them hard, dry, and even crumbly). If they won’t stick together and seem too wet, it can help to add more crispy rice cereal to get a stiffer mixture.

Can You Freeze Rice Krispie Treats?

Vegan rice crispy treats freeze well and are great to keep stocked up for whenever you want a quick treat. Simply place them in an airtight container, in layers, separated by wax paper/parchment paper (to avoid sticking). Freeze them for up to 2 months.

When you want to enjoy one, just pop it onto the counter for about 15 minutes to thaw, and enjoy!

If you try this easy vegan rice krispie treats recipe, I’d love to know what you think in the comments below. I’d also really appreciate a recipe card rating! 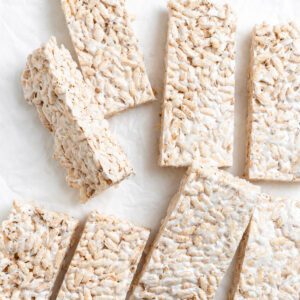