This homemade vegetable barley soup is thick, hearty, wholesome, comforting, and packed with veggies in a simple but flavorful broth. Plus, this 25-minute Instant Pot barley soup provides tons of body in a fraction of the time (stove and crockpot methods also included)!

Traditionally barley vegetable soup is made with beef and a meaty stock, but it definitely doesn’t have to be to make a delicious and nutritious meal. By jam-packing it with veggies and a veggie-broth base, this plant-based vegetarian barley soup is healthy, hearty, comforting, and packed with fiber, vitamins, and minerals.

I love soups mixed with color, texture, and flavor, especially when it means plenty of macro and micronutrients while tasting delicious (like this Instant Pot navy bean soup). It’s also a super stick-to-your-ribs kind of filling!

Did I mention this Instant Pot barley soup is budget-friendly and super versatile, too? Mix and match the grain and veggies based on what you have in your fridge and pantry (or garden!).

I’ve included three methods to prepare this vegetable soup with barley. Instant Pot barley soup is my go-to; you get all the flavor in a fraction of the time and with no hovering or stirring. Just chuck everything in the pot and walk away. However, I’ve also included stovetop and crock pot (slow cooker) vegetable barley soup methods, too!

The ingredients for this vegetarian barley soup recipe are budget-friendly, primarily pantry staples, and fairly versatile!

Barley is a cereal grain that’s short, chewy, and tender once cooked. There are two main types; hulled barley (considered a whole grain) or pearl barley (removed husk and some or all of the bran layer). The latter loses out on some nutrients but takes a lot less time to cook.

This grain is rich in fiber and several micronutrients and is perfect for salads, soups, stews, pilafs, etc. However, note that it isn’t gluten-free!

You can also optionally add some minced cilantro (or parsley) and/or hot sauce for garnish.

This recipe is fairly versatile. Here are a few simple add-ins and recipe adaptions you might enjoy.

How to Make Vegetable Barley Soup?

When a recipe like this Instant Pot barley soup with vegetables comprises just 5 simple steps, it’s already a winner in my eyes.

For more depth of flavor, start by using the sauté function with the vegetables (onion, celery, carrot, potato, and garlic) with a swirl of oil or vegetable stock until lightly browned.

The residual heat should be enough to finish cooking the frozen veg when making Instant Pot barley soup. Replace the lid for 2-3 minutes to help the process. If you find it lacking in flavor, you can also add another bouillon cube at this point.

If your house is gadget-free, then this stovetop vegan barley soup is still wonderfully simple, and the low and slow simmer means you only need to stir it occasionally. However, it takes longer than the Instant Pot barley soup.

Then serve it up, optionally garnished with a drizzle of hot sauce and sprinkle of cilantro or parsley.

Slow cooker vegetarian barley soup is great for those who want to ‘set-and-forget’ and leave it doing its thing all day, making the house smell amazing, and being ready just in time for dinner!

Can I freeze barley soup?

Barley soup freezes very well. I like to freeze soup in portions (easier for defrosting as needed). You can store the vegetable barley soup in a silicone muffin mold, Ziplock bags, or jars (with ½-inch headspace). Freeze for 2 months. Allow a portion to thaw in the refrigerator overnight before reheating.

Could I use hulled barley?

While it’s possible to use hulled barley, it’s a whole grain, so it takes much longer to cook. So if you wish to use it, I recommend par-cooking the grain first until it requires around the same time as pearled barley, then continue with the recipe. Otherwise, it will take much longer to cook than the vegetables.

Unfortunately not. If you want to make a gluten-free version of this soup, you could replace it with rice or quinoa.

Can I substitute the barley?

Yes, this vegan barley soup would work with several other types of grain, such as bulgur wheat, farro, millet, quinoa, etc. It may also work with small pasta shapes and orzo. Just note that the cooking time will vary based on which you use.

Enjoy a big bowl of this barley soup with vegetables alone or with one of several sides, such as:

Make ahead: You can rinse and chop the various vegetables 2-3 days in advance and store them separately in containers in the refrigerator.

More so, most soups taste better on day two, so I always recommend making enough for plenty of leftovers (or making it a day in advance).

Store: Allow the vegetarian barley soup to cool and then store it in an airtight container in the fridge for 4-5 days.

Reheat: Use either the stovetop or microwave to reheat the soup until warm. Add a splash of additional water or stock if the soup has thickened.

Note that, like pasta soups, the barley tends to soak up the broth more as it sits and becomes softer. So feel free to add a little more broth if needed. You could also cook and store the grain separately if preferred.

If you try this meat-free vegetable barley soup recipe, I’d love to know what you think in the comments below. I’d also really appreciate a recipe card rating! 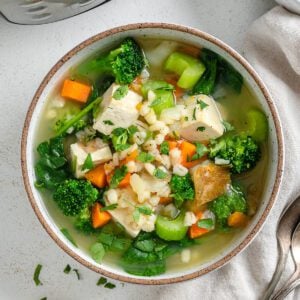