Transform your corn this summer into delicious vegan elote (Mexican street corn) in under 20 minutes - made with a creamy vegan mayo-lime-chili sauce (nut free!), vegan parmesan, and cilantro!

If you’re looking for a new favorite summertime side dish, let me introduce you to this vegan elote (aka vegan Mexican street corn). With a combination of sweet corn (also smoky when grilled), a creamy sauce, spicy chili powder, tangy lime juice, and salty vegan parmesan/feta, this Mexican corn recipe is a treat for your taste buds and perfect at summer BBQs and potlucks!

You can use whole ears of corn with or without the husks and prepare this simple Vegan Mexican street corn recipe in just 20 minutes for the perfect way to dress up corns of cob this summer (and ever!).

There are two main types of Mexican street corn, esquites, and elote.

Esquites (also called ‘elotes en vaso’) refers to a snack of corn in a cup. In comparison, Elote (meaning ‘tender cob’ and pronounced eh-loh-tay) is a Mexican street corn dish using grilled corn on the cob.

The combination of sweet, savory, salty, tangy, smoky, and spicy makes for an impressive, crowd-pleasing summertime side dish. And the snack is so popular that it’s sold in street carts on almost every street.

Unfortunately, if you’re vegan, this dairy-heavy side dish may seem unattainable. Still, with just a few simple ingredient swaps, it’s easy to make delicious vegan elote at home and enjoy this Mexican corn recipe whenever you’d like! Unlike many other vegan Mexican street corn recipes, this version is 100% nut-free, too!

This vegan street corn is made up of just 7 simple ingredients.

What Else Could I Add?

Just 7 ingredients are needed for this Vegan Elote:

After cooking the corn, leave it to cool for a short while. Otherwise, the vegan mayonnaise sauce is more likely to slide right off.

Sprinkle the vegan street corn with a further dash of chili powder for color and extra flavor if desired before serving.

How To Cook Corn On The Cob?

Traditionally, Mexican street corn recipes usually use grilled corn, but you can boil or steam it, too.

Boiled corn on the cob: First, remove the husks and silks from the cobs. Meanwhile, bring a large pot of salted water to a boil. Carefully add the corn and cook for 3-6 minutes, or until the corn is tender and bright yellow.

Steamed corn on the cob: Using a tiered steaming pan or filling a pan with a couple of inches of water and adding a steamer above will work for this method. Heat the water over high until boiling, then add the shucked corn cobs and a tight-fitting lid. Reduce the heat to a simmer and cook for 4-7 minutes until tender and bright yellow.

Grilled corn on the cob

You can grill the corn in or out of the husks (soak the corn first for 15 minutes if doing the latter, so the husks don’t catch fire). I prefer to remove the silk and the outer layers of the corn husks, then fold the remaining husks back over the corn. This will help it char but not overly so.

Preheat your grill to high (around 550F/288C). Then add the corn cobs and cover the grill. Allow the corn to cook, occasionally turning, until it’s completely charred on all sides (around 15-20 minutes).

Grilling the corn within the husks helps to keep it from drying out and overly charring while also giving it a nuttier flavor.

However, you can also cook it directly on the grill by brushing them with oil and cooking, occasionally turning, until each side is browned and lightly charred.

You can also use a grill pan on your stovetop using the same method over high heat.

How to shuck corn?

This can get messy, so I like to do it directly over my composting bin. First, grab half the husk and silk at the cob tip and rip downwards to peel away as much as possible. Repeat until the husk is entirely removed, then remove any lingering strings.

How to choose the best corn?

If you’re buying corn in their husks, there are several tips for choosing the best cobs:

Look for corn with a tight green husk and golden brown tassels (the hair bit at the top), avoiding any with brown, cracked, dry-looking husks and tassels.
You can also feel the corn for plump kernels and no gaps.
Of course, if you’re able, the best way to check is to peel back the husk slightly and take a look.

Can I use frozen corn?

It should work if you thaw it first.

You can enjoy this vegan elote as an appetizer or a side dish with almost any Mexican-inspired meals like:

More so, it’s a wonderful addition to any cookout/BBQ, potlucks, special occasions (like a 4th of July party), and dinner parties. Either way, get ready to watch this Mexican corn disappear in minutes!

Make ahead: If you plan to grill the corn, you can remove the silk and several layers of the husk and leave them to soak in water for several hours before grilling.

You could also cook the corn and store it covered in the fridge separately from the toppings for 3-4 days. That way, you can reheat it gently and add the toppings when needed.

Store: Once assembled, it’s best to enjoy the Vegan Elote immediately or within a day of preparing it.

Reheat: If the Vegan Elote is fully assembled, I recommend reheating them in the oven at 350F/180C until warm.

If you try this easy vegan elote recipe, I’d love to know what you think in the comments below. I’d also really appreciate a recipe card rating! 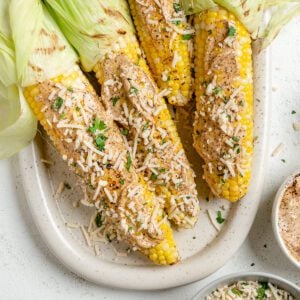