Enjoy sweet, creamy, hearty, one-pot vegan corn chowder with a selection of nutritious veggies, including potato and zucchini, and either fresh, frozen, or canned corn and no dairy! Stovetop, Instant Pot, and slow cooker methods below!

What Is Corn Chowder?

Traditionally ‘chowder’ refers to a soup or stew, often made with fish or seafood, containing milk or cream, and thickened with crackers or a roux. It was traditionally a shipboard dish to provide sustenance of body and mind, though it soon became popular across Europe and America as a simple yet delicious dish.

This dairy-free corn chowder is taken from my cookbook with Michelle Cehn, The Friendly Vegan Cookbook. Aside from the obvious dairy to non-dairy substitutes, I’ve made a light and healthy version using plant-based milk instead of vegan cream, left the plant-based butter optional and boosted the nutrients in this veggie corn chowder further with the addition of zucchini and bell pepper. It’s also naturally thickened by pureeing a portion of the soup.

The results are a creamy and comforting soup made primarily with inexpensive whole-food plant-based pantry ingredients and perfect for filling your belly without weighing you down on chilly winter days and all through spring and summer when you're craving a hearty meal.

Plus, this vegan potato corn chowder is incredibly simple to prepare on the stovetop, and I’ve also provided methods for a slow cooker and Instant Pot corn chowder below!

This vegan recipe for easy corn chowder is packed with nutrients and flavor for a super satisfying meal, made primarily with pantry staples and a few fresh elements.

You may also use sweet potatoes, though the healthy corn chowder will be much sweeter and works well with extra seasoning and spice.

I also like to add a generous pinch or two of red pepper flakes, cayenne pepper, chipotle pepper, or some sriracha for a spicy corn chowder.

What Else Could I add?

Like most soups, this vegan corn chowder recipe is also highly versatile. Here are a few ways to experiment to adjust this summer corn soup more to your liking.

How to Make Vegan Corn Chowder?

Like many soups, this veggie corn chowder recipe is very simple to prepare. Just a bit of chopping, sauteing, simmering, and blending, and voila, a creamy, thick, and delicious vegan potato corn chowder!

You can also do this in a regular jug blender, transferring the soup (in batches) to be blended. Hold the lid down with a tea towel while you blend and release hot steam from the jug often, so there are no soup explosions.

I haven’t tried this specific recipe in my Instant Pot yet, but it should work similarly to other IP soup recipes.

I recommend you start by using the SAUTÉ function to sauté the veggies as written in the main recipe. Then, after adding the corn, potato, and broth, close the lid and cook on manual HIGH for 12 minutes, using the quick-release pressure valve afterward.

Next, set the IP back to SAUTE and mix in the blended corn mixture, cooking for 5 minutes. Finally, use an immersion blender directly in your Instant Pot- voila, delicious Instant Pot corn chowder!

First, sauté the various ingredients as written in the stovetop method. Then transfer those plus the 2 cups of corn, potatoes, and broth to your slow cooker (crock pot), mix, add the lid, and cook on LOW for 7-8 hours or HIGH for 3-4 hours, or until the potatoes are tender.

Then, mix in the blended plant-based milk and corn mixture and cook for 10-15 minutes on HIGH. You can then use the immersion blender directly in the crockpot before serving.

Make ahead: You can pre-chop/slice all the veggie corn chowder ingredients (except the potatoes) 1-2 days in advance, storing them in airtight containers in the fridge.

Fridge: Store any leftover cooled vegan corn chowder in an airtight container in the refrigerator for 4-5 days. Like most soups, it tastes even better on day two!

Reheat: I like to gently reheat the vegan corn soup on the stovetop, but a microwave will also work. If it has overly thickened, stir in a little more veggie broth or dairy-free milk.

Can You Freeze Corn Chowder?

Freezing soups with dairy-free cream or milk can change the texture upon thawing, so if you’re planning to freeze it, I recommend holding off on the creamy ingredient until it’s thawed.

Freeze the dairy-free corn chowder in airtight freezer-safe containers, Ziplock/Stasher bags, or even a silicone muffin mold (for individual servings), leaving room for expansion. Freeze for 2-3 months, allowing it to thaw in the fridge overnight before reheating it.

What To Serve With Vegan Corn Chowder?

Enjoy a big bowl of this vegan potato corn chowder alone or alongside:

If you try this easy vegan corn chowder recipe, I’d love to know your thoughts in the comments below. I’d also really appreciate a recipe card rating! 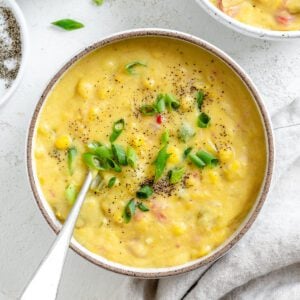