I’ll admit, I love regular bread stuffing. A lot. However, it weighs heavily in my tummy during the holiday when there’s a table of delicious food to make room for. I also often share the holidays with several guests who are gluten-free or otherwise can’t consume bread. That’s where delicious vegan, gluten-free, keto, paleo, and bread-free cauliflower stuffing comes in!

By swapping out the bread for cauliflower, this crowd-pleasing keto stuffing makeover is far lighter (both in calories and carbs) yet still packed with flavor. It’s also super comforting with the addition of poultry seasoning and plenty of vegan butter (or a paleo-friendly fat) for richness. As it fits many dietary requirements, everyone can enjoy it, too, and what’s Thanksgiving without stuffing?

Preparing this vegan stuffing is super simple too. Just chop the veggies, toss them with the seasonings and vegan butter (or oil), and roast everything on a sheet pan in a high-heat oven until tender and lightly caramelized. Using just one pan (two, if they’re small) and a bowl = easy clean-up, too!

This cauliflower stuffing recipe is made entirely of common veggies and simple pantry basics.

What Else Could I Add to Cauliflower Stuffing?

To hit the notes of regular bread stuffing, I recommend combining thyme and sage (about ½ teaspoon each).

How to Make Vegan Cauliflower Stuffing?

This vegan stuffing recipe takes less than 15 minutes to prepare from start to finish and follows just 5 simple steps.

For more caramelized veggies, increase the baking time slightly. Alternatively, switch on the broiler for a few minutes.

Can I make this cauliflower keto stuffing recipe on the stovetop?

Absolutely. Start by sautéing the onion and celery in some of the melted vegan butter for several minutes until translucent. Then add the mushrooms, cauliflower, garlic, and seasoning, and cook until the mushrooms release their excess liquid and the veggies caramelize. Add ¼ cup of veg broth. Continue to cook until the liquid has been absorbed. Optionally broil at the end for a crispier top.

Can I use frozen cauliflower?

I haven’t used frozen cauliflower florets, though I imagine the texture won’t be the same. If you want to, let them thaw first and cut them down to size.

Could I make riced cauliflower stuffing?

That should work, though it will affect the baking time, so keep an eye on it. Rice cauliflower stuffing might work best when cooked on the stovetop.

Make ahead/store: You can prepare this low-carb stuffing up to 4 days in advance and reheat it on the day (though I recommend under-baking it by 5-10 minutes as it will continue to cook when you reheat it). The same goes for storing leftovers - keep them covered or in an airtight container in the fridge for 4-5 days.

Freeze: Allow it to cool and store in a Ziplock/Stasher bag for up to 4 months. Thaw in the fridge overnight before reheating.

Reheat: Transfer the vegan stuffing to an oven-safe dish and bake it for 20-30 minutes at 350F/175C. For smaller portions, you can reheat it, covered, using a microwave at 50% power.

However, as it’s also just a delicious veggie side dish, you can serve this with many meals for extra nutrients and flavor!

If you try this simple low-carb, vegan cauliflower stuffing recipe, I’d love to know what you think in the comments below. I’d also really appreciate a recipe card rating! 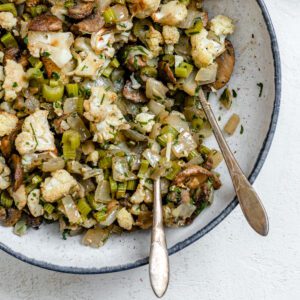