These vegetable fajita tacos (aka vegan vegetable fajitas) are quick and simple to prepare and loaded with color and flavor, for a truly satisfying plant-based meal in under 30 minutes!

With a combination of Mexican spiced bell peppers, onion, and black beans, these mouth-watering vegetable fajita tacos are so packed with color, flavor (caramelized, smoky, spicy, and savory), and pure belly satisfaction to impress the entire family (yes, even the meat eaters!).

These vegan fajitas are so simple to make, too. Just slice the veggies, saute or grill them with the seasoning, and assemble them alone or keep reading for all my favorite topping options (perfect for allowing everyone to customize their final veggie tacos). Either way, get these veggie fajitas from the kitchen to table in under 30 minutes, with just a handful of ingredients.

Fajitas Vs. Tacos: What's the difference?

You may notice that I use the two terms interchangeably in this post, although they're technically different. Why?

Whereas tacos refer to any food wrapped in a tortilla. For that reason, this recipe can be referred to as both veagn fajita tacos or vegetable fajitas and can be enjoyed alone or loaded up with extra toppings.

What Else Could I Add To The Veggie Fajita Tacos?

This includes ways to adapt the veggie fajita recipe as well as extra toppings:

How to Make Vegetable Fajita Tacos?

You can also do this step using the skillet or a grill pan on your grill.

How To Warm Tortillas

Stovetop: If you have a gas stove, you can use tongs to place the tortillas directly over the flame (15-20 seconds per side) for a slightly charred, smoky flavor. Alternatively, heat them in a large skillet.

Serve these veggie fajitas in the traditional way by bringing the hot skillet directly to the table (on a heat-proof surface).

You can enjoy these onion and bell pepper tacos alone or make more of a meal by pairing them with rice (like this Instant Pot Mexican rice), an easy green salad, or even fries.

Can I make vegetable fajitas in the oven?

Absolutely. To make sheet pan veggie fajitas, spread the oiled and seasoned sliced vegetables across a large parchment-lined baking sheet and bake them in the oven at 400F/200C for about 20 minutes, flipping halfway.

In the last five minutes, heat the black beans in a pan with a little of the seasoning and garlic.

How to use the leftover fajita vegetables?

They will work within burritos and burrito bowls or as a simple side dish for Tex-Mex meals.

Make ahead: You can prepare the fajita vegetable mixture 3-4 days in advance and store them in an airtight container in the fridge until ready to use.

Store: Once assembled, enjoy the black bean veggie tacos quickly to avoid them becoming soggy. Any leftover filling will store in an airtight container for 3-4 days.

Note that the veggies release liquid as they sit. I recommend serving them with a slotted spoon the next time you use them, to avoid soggy tortillas.

Reheat: Use the stovetop (or microwave) to reheat the fajita vegetables, stirring often.

If you try this easy vegetable fajita tacos recipe, I'd love to know what you think in the comments below. I'd also really appreciate a recipe card rating! 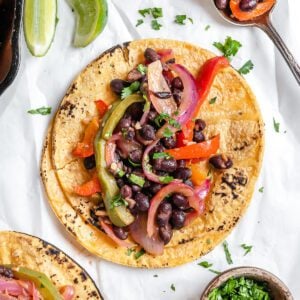