What is Mock Apple Pie?

Mock apple pie recipes are designed to taste like apple pie but with no apples. Before refrigeration, these pies (also called 'desperation pies') helped consumers to enjoy certain types of pies year-round, even out of season. At that time, green tomatoes and saltine crackers were often used to create the mock apple pie flavor.

Nowadays, there are popular recipes for mock apple pies with Ritz crackers, which provide the taste and mouthfeel of an apple pie, though without much nutritional value. However, for this zucchini mock apple pie recipe (zapple pie) we're relying on, you guessed it, zucchini to make up the 'apple' filling. It's crisp, turns tender when cooked, neutral in flavor, and nutritious to boot.

During summer, this appleless apple pie is a great way to use up a glut of garden zucchini (along with these blueberry zucchini muffins). And all you need is a handful of simple and inexpensive pantry staples to transform it into your mock 'apples.' Once flavored and baked, no one will ever know it's made from zucchini!

Plus, make the process even simpler by relying on a pre-made pie crust. You can also easily adjust ingredients to adapt this recipe to your needs. I.e., gluten-free, refined sugar-free, sugar-free, etc.

Want to enjoy treats WITH actual apples? You might like these easy vegan apple muffins, dehydrator cinnamon apple chips, or air fryer apples!

If you'd prefer to use unrefined sugar, coconut sugar could work in place of brown sugar. You could also make a sugar-free version using a brown sugar alternative, erythritol, monk fruit sugar, etc.

For more flavor: You could add a pinch of ground cardamom or ground ginger. You can also enhance the 'apple' flavor in the zucchini mixture with a few drops of natural apple flavoring, though I usually don't. Add more sweetness with a handful of raisins.

For more flavor: There are several ingredients you could add to the topping, including pure vanilla extract, oats (for more texture and flavor), chopped nuts, and some sugar (to caramelize for a crisper topping).

Don't discard the scooped-out zucchini flesh. It can be added to soups, smoothies, stews, and other dishes.

Alternatively, you can sauté the zucchini for five minutes (or until tender-crisp) with the lemon juice and salt.

Do I have to peel the zucchini?

Technically no, as the skin will soften while the zucchini sweet pie bakes. However, the peel's dark green color sets it apart from apples, so it's often removed for aesthetic reasons.

Can I omit the crumb topping?

You can make this appleless apple pie with no topping, a crumble topping or even additional pie dough over the top (a top crust). It's up to you.

Can I make this a gluten-free zucchini mock apple pie?

Just like regular fruit pies, there are a few tried and tested ways to serve this zucchini apple pie, including:

Enjoy the mock apple zucchini pie at potlucks, cookouts, and mid-week meals, and watch your guests shock when you tell them the ‘special’ ingredient.

Store: Once baked, you can store the zucchini mock apple pie in an airtight container at room temperature for 2-3 days or in the refrigerator for 4-5 days.

I haven't tried freezing the pie yet, as zucchini can become mushy upon thawing. However, if you'd like to try it, I recommend wrapping it tightly and freezing it for up to 3 months.

Reheat: Reheating the zucchini sweet pie in the oven (10-15 minutes at 350F/177C) will help to maintain some of the crisp texture of the topping. Alternatively, you can individually reheat slices in a microwave for 60-80 seconds.

If you try this easy zucchini mock apple pie recipe, I'd love to know what you think in the comments below. I'd also really appreciate a recipe card rating! 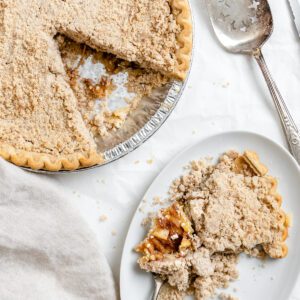